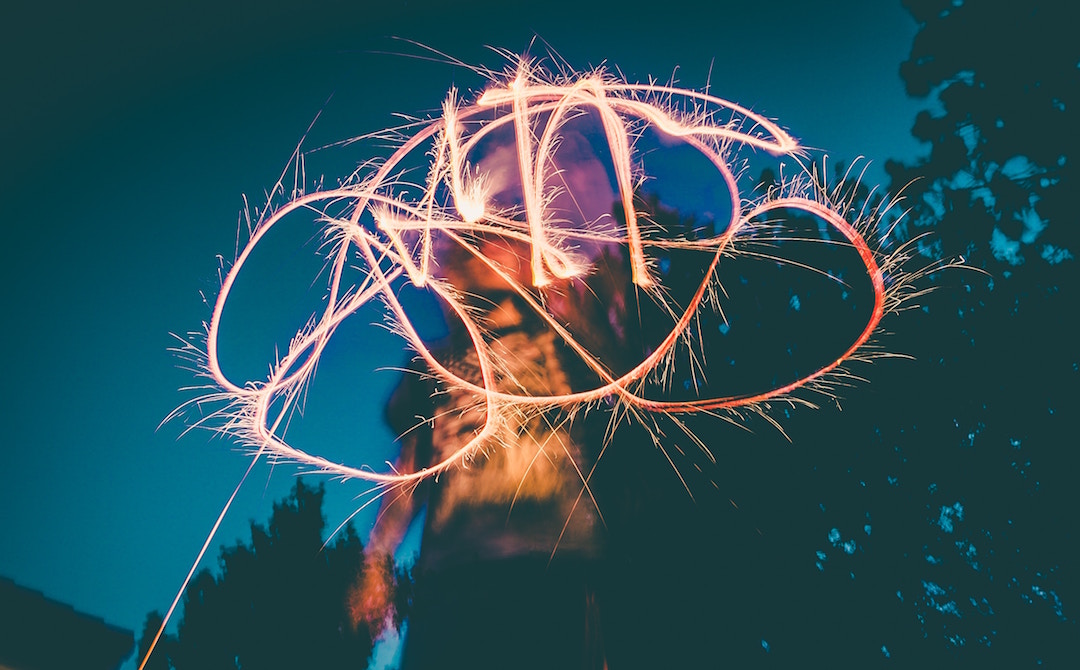 First of all, let me say that I like theory. I like convoluted and complex language when it represents careful and complex argumentation and analysis. I actually enjoy reading Deleuze, I think philosophy is fun, and I will almost never dismiss complicated text as mumbo-jumbo. Today is an exception, and Voice or chatter? is an apt title for the recent research report form MAVC.

This research report explores the “conditions in democratic governance that make information and communication technology (ICT)-mediated citizen engagement transformative,” on the basis of eight country cases. Ultimately, however, it fails to deliver meaningful insights. The bulk of text engages with broad theoretical frameworks and a long list of findings, both of which are convoluted, and largely detached from the empirical cases., Though the cases receive only meager attention ( 8 of 68 pages), their description is the most compelling portion of the report. All in all, this document is an difficult and unrewarding read. But it’s weight and ambition make it seem important.

I read this report so that you don’t have to. Below is a quick summary.

In brief, this report was oddly structured, resulting in a difficult, disjointed read. The findings were generally presented as non-controversial abstractions, largely unrelated to the empirical cases. Nonetheless, below I list all 24 of them with an explanation and comments for your skimming pleasure. Neither theory nor methods were clearly applied in this research, through a complex theoretical framework was described at length. The case studies were by far the most interesting and compelling portion of the report, despite profound brevity.

Let’s get it out of the way. This report is a long, hot mess. The introduction is rambling, the literature review random, the methods description speaks almost exclusively to case selection (it’s 39 words on within-case methods describes interviews, but only in so far as to mention that “selection of key informants was a case-specific exercise”). The structure is also challenging, without clear through lines from theory, to cases, to findings, and to conclusions, or really between any two of those components. This is frustrating, because a failure to apply structuration theory in either case study analysis or findings means that there is no reward for having read about it.

Poor structure also impedes basic knowledge capture. Descriptions of the cases are, for example, split into a series of sequential descriptions. Each country is described in terms of quality of governance, then each is described in terms of e-participation and then in terms of infrastructure, before you even get to the descriptions of the cases. So if you want to understand what’s happening in Colombia you have to flip between four sections, before looking for how Colombia is referenced in each of the 24 findings. As such, there might be a lot in this report I didn’t get, despite having read it three times.

Chatter’s findings come at the end of the report, but are ostensibly the most important, so I’ll present them first. There are a whopping 24 findings in total, each with a short explanation and together comprising the bulk of the report (24 of 68 pages). Generally, the findings either present obvious truisms, or provocative claims with little empirical consequence. There is generally only very superficial reference to the empirical cases, and no argument or method indicating that the findings draw directly from the cases. When cases do provide interesting examples, the lack of analysis and lack of description preclude any real insight, and I’m left wishing that this report chose to focus on one or two of the findings.

I’ll list the findings below for skimming, together with an explanation when necessary, and a short comment.

The Theory and Methods

This report’s research “framework” is more generally a vague gesture to structuration theory, Structuration theory deserves a lot more careful explanation than it gets here, and the author’s casual application of the theory results in a lot of text with little insight. Occasionally there’s a diagram, which emphasizes how provocative structuration theory can be at the level of generality, and how little it has to offer empirical analysis. 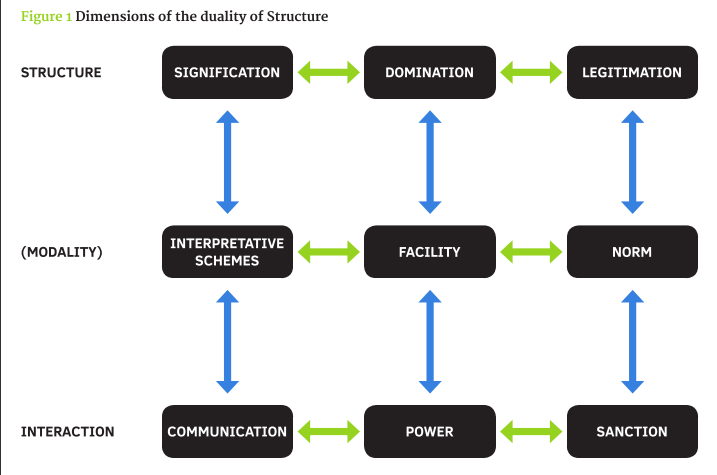 Structuration theory might have something to offer in understanding individual cases. Unfortunately, however, the emphasis of this report is on comparative analysis, and there isn’t enough detail or method to give this theory traction. This makes for a lot of sludging through theoretical text that never pays off, it also produces weirdly complicated conclusions.

Make sense of the graph below, I dare you. It’s like the analysis is angry at the mapping innovation of systems theory, and wants to prove that it can’t be told what to do. 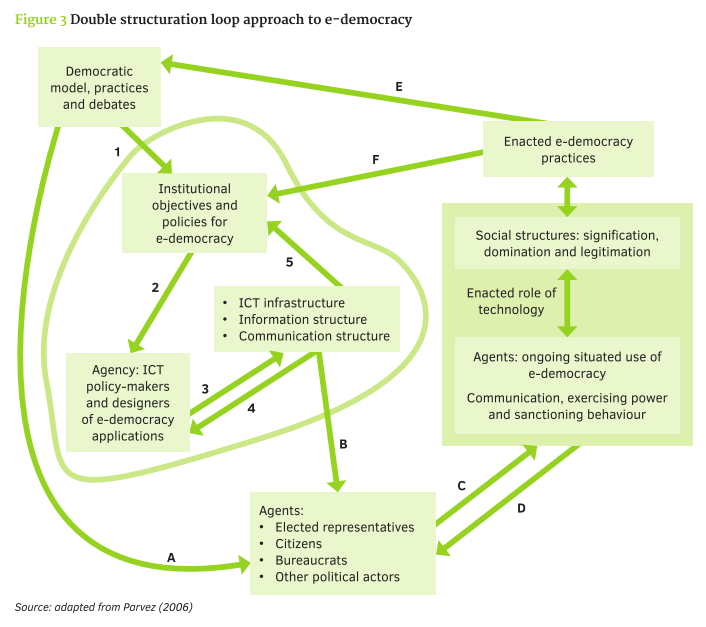 This is by far the most meaningful part of the report, and the eight pages describing initiatives are worth reading. Here’s a summary version, to highlight those of interest.

There isn’t a lot more detail than this in the actual report. So if any of these spark your interest, you’ll want to google additional information. But despite this brevity and a number of provocative and unsupported claims, it makes for an inspiring read.

This report concludes with four abstract recommendations (1. Digital participation requires revisiting existing laws, 2. Datafied democracy needs new governance frameworks, 3. Digital democracy must put the last person first, 4. Public interest should be paramount in e-government arrangements). I won’t go into them, they are as non-contentious as they are impossible to operationalize in any immediate sense.  The below Venn diagram gives a better overview of the essence than does the text. 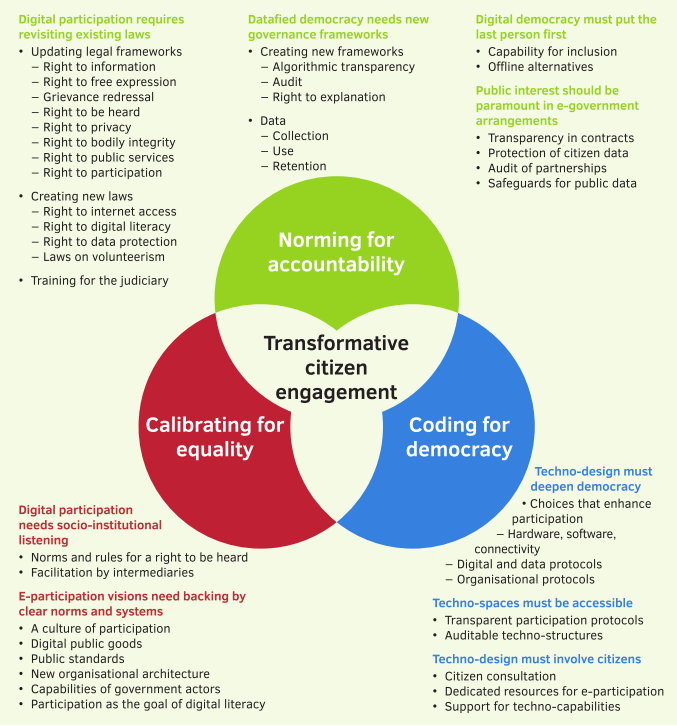 Reading this report was a lot of work. @participatory called it good reading, but he’s exceptionally interested and uniquely well informed. For those of us not as well positioned, I don’t expect many will get through it.

It was probably also a lot of work to produce, and I can’t help wondering how much it cost (or if MAVC paid per finding). All and all, it’s a shame if something that demands so much effort doesn’t produce something more useful. When I decided to blog this report, I was really hoping to uncover the hidden ways in which it did. But I simply didn’t find them. There’s a short list of interesting initiatives, a long list of uninteresting findings, and a case study in how not to use theory. We often hear complaints that nobody bothers to read pdf reports. This is part of the reason why.