A month’s worth of research links again. I think I’ll try at least one more month like this, but do let me know if you have a preference for this or for the weekly format.

We’re doing anti-corruption programming all wrong, but women and tech help.
Research exploring “how corruption really works in seven countries in East Africa and Eurasia” finds that legalistic and formalistic approaches often fail “because the informal system is highly effective at manipulating the formal system,” and though the report doesn’t address tech directly, there’s a heavy emphasis on the importance of harnessing social networks of outsiders and leveraging innovative and bespoke strategies. On the other hand, analysis of data from 125 countries, looking both at parliaments and municipal government, suggests that having more women in government decreases corruption. And regression analysis of secondary comparative data for 90 countries finds that national use  of ICTs (measured according to the Global IT Report) “reduces corruption by increasing the certainty and celerity of punishments” but that this effect is moderated by anti-corruption legislation.

Citizen-state interaction
Political elites want citizen input, especially if it’s informal and spontaneous, according to  interviews (n=51) with ministers in the UK, Aust, NZ, Canada and US. On the flipside,  government legitimacy is evaluated on the basis of democratic input and participation, even for citizens who care most about policy outputs, according to survey data (n=5000) from four European countries (though the results are nuanced and messy).

In other news, analysis of Eurobarometer data suggests that “online news consumption leads to more positive evaluations of government,” survey data from the 2010 UK elections suggests that online info consumption boosts electoral participation, and structural equation modelling of an Portuguese online survey (n= 210) indicates that performance expectancy and facilitating conditions predict whether people intend to e-participate, but ease of use and social status don’t.

Oh, and you know what else messes with civic participation? Income inequality, at least in the US, but the relationship is messy.

Open data details
“Leadership and diversity of capabilities significantly contribute to the success” of engaging citizen stakeholder groups in open data initiatives, according to comparative case study work in  of citizen groups in OGD engagement, while “non-technical skills, like creativity, curiosity, and critical thinking” are more important for facilitating citizens use of open data than are “technical skills like coding and visualization,” according to research coming out of workshops with 34 “open data professionals.”

Improving systems:
Social accountability mechanisms have more positive impacts on maternal health outcomes if they are driven by civil society than by government (and they also increase use of services) accroding to a framework of social determinants analysis in Gujarat, India. Information, dialogue and negotiation were particularly effective in empowering women to make demands and utlimately influence policy and service delivery.

Meanwhile, analysis of data on FOIA requests and responses in the UK suggests that decentralization doesn’t make government more responsive, and a field experiment with Slovakian municipalities confirms previous research showing that requests for government information are more effective if they explicitly reference FOI legislation (it also helps if municipalities are led by independent political parties, female mayors, or don’t have many ethnic minorities).

E-justice increases the productivity of judicial systems, but doesn’t make things go any faster, according to two separate studies of administrative data in the Brazilian context, and an analysis of the Spanish Network of Smart Cities provides evidence that large cities increase participation by going smart, primarily through the use of centralized web portals, but results are uneven for smaller cities.

The dark side:
“Wherever per-person Facebook use rose to one standard deviation above the national average, attacks on refugees increased by about 50 percent,” according to reporting on German hate crime research. Spend a minute with that.

There’s a new measure for the intensity individuals’ policy preferences.

Field Comment:
African social tech is a sprawling and bustling collection of ecosystems, with limited and unequal distribution of resources, and in which tech hubs are overstretched. These and more findings in the fascinating and extensive study by @madeiraiti ‏’s “sprawling, multilingual, multi-continental team.”

Collaborations and calls:
A new research initiative led by OKI, King’s College London and the Public Data Lab are starting a project to research what “citizen-generated data” can do, with a particular focus on the SDGs. Meanwhile, OCP is asking for open contracting impact stories, and OKI and MySociety are looking for help to map all the world’s electoral boundaries.

Also, the call for papers for next year’s The Impacts of Civic Technology (TICTec).

Collections:
The latest Open Data Research Update links to articles on open washing and Latin American trends, plus case studies on Brazil, Colombia, Spain, Uruguay, China, and a Swedish municipality. There’s also a special Issue on Trust, Security, and Privacy in Crowdsourcing in the IEE Internet of Things Journal, and the Centre for Policy Innovation and Public Engagement has mapped policy innovation labs across Canada.

The Policy & Politics Journal is meanwhile making articles focused on Democracy and it’s Discontents free until Sept 20th, this includes some interesting work on direct democracy and deliberative processes.

Commentary:
The Development Impact blog has a review of Gugerty and Karlan’s “The Goldilocks Challenge: Right-Fit Evidence for the Social Sector,” a longer version of the authors’ superficially polemic article, “Ten Reasons Not to Measure Impact – and What to Do Instead.” According to @ICT_works’s read of 15 year old research on ICT4D, not much has changed in the last decade and a half. Oh, and here’s a paper arguing that “marginalized groups may experience less success with digital activism because they are often dependent on smartphones for their primary internet access,” without providing any evidence.

Lastly, there’s been some buzz about McNutt’s new book “Technology, Activism, and Social Justice in a Digital Age.” I’ll simply note that it includes the worst attempt to define civic technology ever. Because that’s not how venn diagrams work. 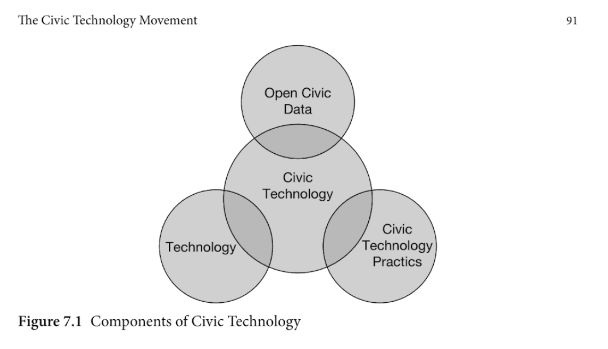 Why are there always so many of these that I can’t fit into the “findings” section? Chew on that…

Ok. This is taking too long.

“A self-efficacy informed approach to anonymously locating digital disruptors” is a paper published in First Monday that proposes a method for identifying anonymous activists and internet disruptors by virtue of how good they think they are at being nerds. I don’t even know where to start with this one.